The active ingredient in Concerta is methylphenidate, a substance that helps people with attention-deficit hyperactivity disorder (ADHD) improve their focus and productivity. Concerta is also used to treat narcolepsy, depression, and anxiety. Although Concerta is effective when used as directed, nonmedical use of this substance has increased, especially among adolescents.

Furthermore, 6.6% of adults surveyed in 2015 and 2016 reported that they had used prescription stimulants to increase their alertness or improve their concentration. Most of these individuals obtained stimulant medications from their friends and family members.

Nonmedical use of Concerta can have serious consequences, especially in individuals who have already been diagnosed with high blood pressure and other cardiovascular conditions. Additionally, Concerta affects the reward center of the brain, increasing the risk of addiction and making it difficult to stop using.

The Basics of Concerta Rehabilitation

This guide was written to provide an overview of the Concerta rehabilitation process, as well as to offer helpful resources for persons recovering from Concerta addiction.

When the initial detoxification period ends, the individual participates in behavioral therapy and uses his or her remaining time in treatment to develop supportive relationships that can help reduce the risk of relapse. 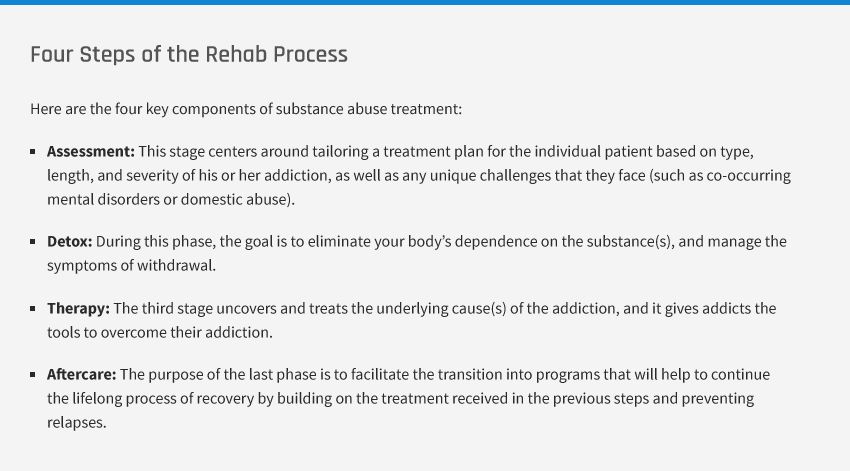 Concerta is considered a Schedule II substance, which means it has a high potential for addiction and abuse. In fact, stimulants are among the most abused substances in the world, according to the 2019 World Drug Report.

The Unique Struggle of Concerta Addicts

Concerta addiction treatment typically begins when the individual undergoes an initial detoxification (detox) process. During this process, Concerta is eliminated from the body. Because Concerta has a half-life of approximately 3.5 hours, about half of the substance is eliminated in this time frame. The rest of the Concerta is usually eliminated within 48 to 96 hours of taking the last dose.

Once Concerta has been eliminated from the body, the full withdrawal process can last for several weeks. Any withdrawal symptoms that occur for longer than two weeks are referred to as post-acute withdrawal symptoms. Depending on the user’s medical history and history of Concerta use, these symptoms may persist for up to a year.

When an individual stops taking Concerta, the amount of dopamine in the brain decreases. Even after the Concerta has been eliminated from the body, the user may experience significant psychological side effects, including paranoia, an inability to display appropriate emotions, heightened levels of anxiety, and impulsivity.

If a user stops taking Concerta suddenly, the psychological effects may be more pronounced. Some users experience severe depression after discontinuing this substance, increasing the risk of suicidal thoughts and suicidal behavior.

Concerta causes an increase in heart rate and blood pressure. Although stopping Concerta can help with these symptoms, rapid changes in blood pressure and heart rate may cause severe complications, including stroke or heart attack.

To help users manage the unpleasant symptoms associated with Concerta withdrawal, medical professionals at a rehabilitation facility may prescribe several medications. Bupropion can help with depression and other psychological withdrawal symptoms. Modafinil has a stimulant-like effect that can reduce the severity of certain withdrawal symptoms; it’s also used to prevent an individual from experiencing low energy levels during the withdrawal process. Propranolol and other beta-blockers reduce anxiety and also help control a user’s heart rate.

For more information about withdrawal, read our guide on Concerta addiction.

In the United States, no medications have been approved specifically for the treatment of Concerta addiction. Because modafinil has stimulant-like effects, it may be useful for curbing Concerta cravings, but more research is needed to prove it’s effectiveness for this purpose.

The most effective treatment for Concerta addiction is behavioral therapy, which may take place on an inpatient or outpatient basis. These therapies address the social and psychological roots of an individual’s addiction, reducing the risk of relapse.

Within either an inpatient or outpatient setting, treatments, such as detoxification services, behavioral therapies, and medication-assisted treatments, are offered for varying lengths of time.

When searching for a rehabilitation center for Concerta addiction, it’s helpful to look for a facility that offers supervised medical detox. This can make the individual more comfortable during the initial detoxification period, increasing the likelihood that he or she will complete treatment.

Although outpatient rehabilitation can be effective, many individuals are likely to benefit from the structure of an inpatient program. Inpatient treatment is especially helpful for individuals who have eating disorders, alcoholism, or other co-occurring disorders.